While the OSI protocols developed slowly, due mainly to their formal committee based engineering approach, the TCP/IP protocol suite rapidly evolved and matured. With its public Request for Comments (RFC) policy of improving and updating the protocol stack, it has established itself as the protocol of choice for most data communication networks. The layers of the TCP/IP protocol are. 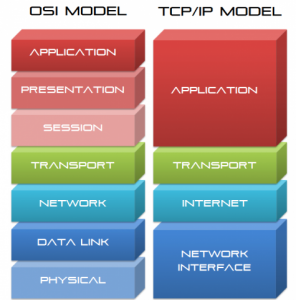 The application layer is provided by the user’s program that uses TCP/IP for communication. Examples of common applications that use TCP/IP are Telnet, FTP, SMTP, and Gopher. The interfaces between the application and transport layers are defined by port numbers and sockets.

The internetwork layer, also called the internet layer or the network layer, separates the physical network from the layers above it. The Internet Protocol (IP) is the most important protocol in this layer. It is a connectionless protocol that doesn’t assume reliability from the lower layers. IP does not provide reliability, flow control or error recovery. These functions must be provided at a higher level, namely the transport layer if using TCP or the application layer if using UDP.A message unit in an IP network is called an IP datagram. This is the basic unit of information transmitted across TCP/IP networks. IP provides routing functions for distributing these datagrams to the correct recipient for the protocol stack. Other internetwork layer protocols are ICMP, IGMP, ARP and RARP.

The network interface layer, also called the link layer or the data link layer, is the interface to the actual network hardware. This layer does not guarantee reliable delivery; that is left to the higher layers, and may be packet or stream oriented. TCP/IP does not specify any particular protocol for this layer. It can use almost any network interface available making it a flexible network while providing backwards compatibility with legacy infrastructure. Examples of supported network interface protocols are IEEE 802.2, X.25 (which is reliable in itself), ATM, FDDI and even SNA