is a computer networking protocol which is designed to protect the default gateway used on a sub network by allowing two or more routers to provide backup for that address; in the event of failure of the/an active router, the backup router will take over the address, usually within a few seconds. In practice, such protocols can also be used to protect other services operating on a single IP address, not just routers.

HSRP is a Cisco-proprietary protocol developed to allow several routers (or multilayer switches) to appear as a single gateway address. Basically, each of the routers that provides redundancy for a given gateway address is assigned to a common HSRP group. One router is elected as the primary, or active, HSRP router, another is elected as the standby HSRP router, and all the others remain in the listen HSRP state. The routers exchange HSRP hello messages at regular intervals, so they can remain aware of each other’s existence, as well as that of the active router.

HSRP election is based on a priority value (0 to 255) that is configured on each router in the group. By default, the priority is 100. The router with the highest priority value (255 is highest) becomes the active router for the group. If all router priorities are equal or set to the default value, the router with the highest IP address on the HSRP interface becomes the active router .When HSRP is configured on an interface, the router progresses through a series of states before becoming active. The HSRP state sequence is Disabled, Init, Listen, Speak, Standby, and, finally, Active. Normally, after the active router fails and the standby becomes active, the original active router cannot immediately become active when it is restored. In other words, if a router is not already active, it cannot become active until the current active router fails—even if its priority is higher than the active router. An interesting case is when routers are just being powered up or added to a network. The first router to bring its interface up becomes the HSRP active router, even if it has the lowest priority of all.

Address active. Actual interface address and the virtual (standby) address must be configured to be in the same IP subnet. 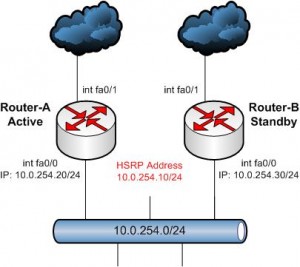 The Virtual Router Redundancy Protocol (VRRP) is a standards-based alternative to HSRP. VRRP is so similar to HSRP; you only need to learn slightly different terminology and a couple of slight functional differences. VRRP provides one redundant gateway address from a group of routers. The active router is called the master router, while all others are in the backup state. The master router is the one with the highest router priority in the VRRP group. VRRP group numbers range from 0 to 255; router priorities range from 1 to 254 (254 is the highest; 100 is the default. The virtual router MAC address is of the form 0000.5e00.01xx, where xx is a two-digit hex VRRP group number. VRRP advertisements are sent at 1-second intervals. Backup routers can optionally learn the advertisement interval from the master router. By default, all VRRP routers are configured to preempt the current master router, if their priorities are greater. VRRP has no mechanism for tracking interfaces to allow more capable routers to take over the master role. 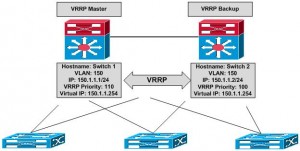 GLBP better known as Gateway Load Balancing Protocol (GBLP) is a Cisco proprietary protocol especially designed to overcome the limitations of Hot Standby Routing Protocol (HSRP) and Virtual Router Redundancy Protocol (VRRP). The added feature to Gateway Load Balancing Protocol (GLBP) is it can load balance between the gateways where as in HSRP and VRRP, the standby routers are configured for redundancy and act as standby only and become active only when the active router fails.

The Gateway Load Balancing Protocol (GLBP) provides load balancing over multiple routers (gateways) using a single virtual IP address and multiple virtual MAC addresses. The forwarding load is shared among all routers in a GLBP group rather than being handled by a single router while the other routers stand idle. Each host is configured with the same virtual IP address, and all routers in the virtual router group participate in forwarding packets. GLBP members communicate between each other through hello messages sent every 3 seconds to the multicast address 224.0.0.102, User Datagram Protocol (UDP) port 3222 (source and destination). 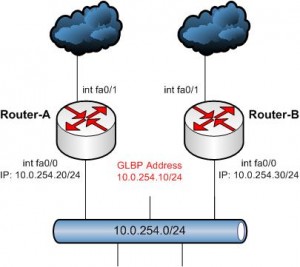