Software-Defined Networking (SDN) is an emerging architecture that is dynamic, manageable, cost-effective, and adaptable, making it ideal for the high-bandwidth, dynamic nature of today’s applications. This architecture decouples the network control and forwarding functions enabling the network control to become directly programmable and the underlying infrastructure to be abstracted for applications and network services. So for better understanding of the above topic first of all we should know the basic difference between Control Plan and Data Plane because every network appliance works on these 2 architecture and The Control Plane, Data Plane in Networks is the heart core DNA in today’s networking hardware to move IP packets from A to Z.

Control Plane – The control plane is the part of a network that carries signaling traffic and is responsible for routing. Control packets originate from or are destined for a router. Functions of the control plane include system configuration and building adjacency between all the routers which ensure end to end routing takes place. Example Routing protocol, network middle box configuration.

Data Plane – The data plane (sometimes known as the user plane, forwarding plane, carrier plane or bearer plane) is the part of a network that carries user traffic. The data plane, the control plane and the management plane are the three basic components of a telecommunications architecture. The control plane and management plane serve the data plane, which bears the traffic that the network exists to carry. Example – CEF, Ip Forwarding, L2/3 Switching.

Example – Control Plane =>Our planning stage, which includes learning which paths the buses will take, is similar to the control plane in the network. We haven’t picked up people yet, nor have we dropped them off, but we do know the paths and stops due to our plan. The control plane is primarily about the learning of routes.

Data Plane => actually moving the packets based on what we learned. The data plane is the actual movement of the customer’s data packets over the transit path we learned in the control plane stage.

In conventional networking, all three planes are implemented in the firmware of routers and switches. Software-defined networking (SDN) decouples the data and control planes, removes the control plane from network hardware and implements it in software instead, which enables programmatic access and, as a result, makes network administration much more flexible. Moving the control plane to software allows dynamic access and administration. A network administrator can shape traffic from a centralized control console without having to touch individual switches. The administrator can change any network switch’s rules when necessary — prioritizing, de-prioritizing or even blocking specific types of packets with a very granular level of control. 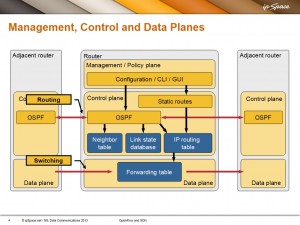 Why Separation of Control Plane and Data Plane is important.

The need of the new network Architecture – The explosion of mobile devices and content, server  virtualization, and advent of cloud services are among the trends driving the networking industry to reexamine traditional network architectures. Many conventional networks are hierarchical, built with tiers of Ethernet switches arranged in a tree structure. This design made for simple client-server architecture is acceptable for small customer but such a static architecture is ill-suited to the dynamic computing and storage needs of today’s enterprise data centers, campuses, and carrier environments. Some of the key computing trends driving the need for a new network paradigm include:

SDN Controller – An SDN Controller platform typically contains a collection of “pluggable” modules that can perform different network tasks. Some of the basic tasks including inventorying what devices are within the network and the capabilities of each, gathering network statistics, etc. Extensions can be inserted that enhance the functionality and support more advanced capabilities, such as running algorithms to perform analytic’s and orchestrating new rules throughout the network.

SDN Technology will help to reduce the cost of managing Large Enterprise/Data Centre Network because instead of putting every Layer 2 switch into the network of any good vendor which cost around $5K, Now Network Team can place any commodity (Bare Metal) switch in between Large Server Farm and switches for connectivity which cost around $1K. Hence if you have to procure 10K switches across 5 Data Center it will save you approx. $40Mn cost and it is also easy to manage all the switches through SDN Controller. There are several more advantages also in respect to manipulating Network traffic pattern which also gives

OpenFlow® is the first standard communication interface defined between the controls and forwarding layers of an SDN architecture. Open Flow® allows direct access to and manipulation of the forwarding plane of network devices such as switches and routers, both physical and virtual (hypervisor-based).Open Flow-based SDN technologies enable IT to address the high-bandwidth, dynamic nature of today’s applications, adapt the network to ever-changing business needs, and significantly reduce operations and management complexity.